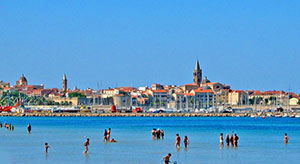 Alghero Sassari, Sardinia, Italy is a wonderful place on the planet. The Italian island of Sardinia is called the divine foot, since according to legend, it was there that the foot of God first stepped.

This island is teeming with tourists at any time of the year, so a noisy crowd and a seething whirlpool of locals and visitors is the most familiar state for this area. But, surprisingly, there is a town on the island, which is located on the coast of Sardinia on the northwest side, which is somehow especially different from the whole island. The name of this town is Alghero, and it was ruled by the Spaniards for a long time, so it is even slightly different culturally from all the other cities close to it.

The history of Alghero begins in 1102, when the Genesue clan built a citadel in the bay of Rada di Alghero in order to defend themselves, since the Pisans could attack from the sea. After that, several centuries later, the city was recognized by the Spanish colony, and despite the fact that they tried to take Alghero from the Spaniards, no one succeeded until the 18th century. That is why this town differs from the whole mass of Italians and even the townspeople, in order to celebrate their individuality, they call their town little Barcelona. At the same time, the rule of the Spaniards, despite the fact that it no longer has power over the city for more than two centuries, still makes itself felt.

The streets are named in two languages, the locals speak exclusively in Catalan, but at the same time, they do not change the Italian cuisine. For tourists, the province of Sassaria, which is where the city of Alghero is located, is a real find, as there is an interesting mix of styles that cannot be found elsewhere. It's nice to stroll through the old quarters of Alghero in the evenings, they seem to have been written off from the most ordinary Catalan city - winding narrow and endless streets, modern restaurants and numerous buildings coexist very nicely with old shops.

The best time for tourism in this city is this May, as this is when the restaurants of little Barcelona get lobsters at the lowest prices of the year. But the sea will remain the main attraction of Alghero, as beautiful corals grow here, which can be found in processed form in all souvenir shops.

Local tourists are also interested in the price of real estate, since it is impossible not to want to stay in this city forever.

No property found with the parameters entered