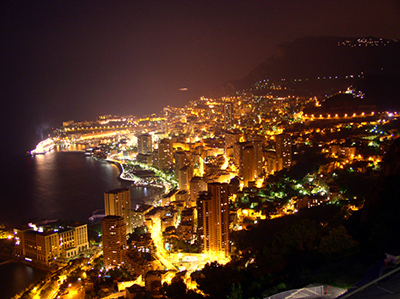 The Principality of Monaco is located on the Ligurian west coast (Riviera di Ponente). This is a small state in the world after the Vatican. In administrative terms, it consists of one municipal district, which occupies the entire state territory.

The state is considered a tax haven because there are no direct taxes; the secrecy of deposits is observed, which contributes to the financial prosperity of the country. The Principality has three main parts:

The Phoenician colony with the name "Monoike" first came under the rule of the Greeks, and then the Romans, under whom it was called "Portus Herculis Monoici". Starting from the 11th century, it was part of the possessions of the Genoese Maritime Republic. In 1297, Francesco Grimaldi captured the fortress built by the Genoese in 1215, and the territory became in every sense the property of this family from 1314. In 1512, France recognized the absolute independence of the principality, and it also included Menton and Roccabruna (the latter declared themselves independent communes in 1848 and are now French territory).

Apartment in Monaco near the port

Apartment for sale in Monaco Apartment of 86 m2 with a balcony and sea and mountain views. The apartment consists of: living room, two bedrooms, bathroom.

Apartments for sale in Monaco

Small apartment for sale in Monaco. Apartment 42 m2 with a balcony of 6 m2. The apartment overlooking the sea and Italy consists of: living room with kitchen, bedroom, bathroom. Jardin Exotique Zone. Individual heating,...

For Sale apartment in Monaco Apartment for sale in Monaco, Monte Carlo area, a stone's throw from the casino and the center of the principality. The apartment consists of two bedrooms, two bathrooms, a hall with an exit... Monaco on sale shop in the Hermitage

On sale clothing store in Monaco The total area of 130 m2. Rent per month 7000 euros. Utility room and toilet.

2 roomed apartment on the Port Hercule

Monaco apartment for sale For sale apartment of 75 m2 in Monaco, near the port with sea views. Completely renovated. The apartment consists of a living room with a kitchen, a bedroom with access to the terrace and sea...

Real estate in Monaco near the casino

Apartment in Monaco Sale - large apartment in Monaco, Golden Square, the very center of the Principality of Monaco. Apartment 103 m2 consists of: a living room with kitchen and access to a terrace with sea views, two...

Buy an apartment in Monaco

Apartment near the beaches of Larvotto Bright sunny apartment in the famous Chateau Perigord II. It consists of an entrance hall, a bathroom with shower and an open-plan living / kitchen. The property is located in the...

Apartment in La Rousse - Saint Roman Spacious studio apartment with an elevator is located in the Belvedere Palace complex, one of the best bourgeois buildings in Monaco, known for its high ceilings and classic architectural...

Apartment in the center of Monaco

Studio with sea view in Monaco

Apartment in Moneghetti A very large studio apartment with a terrace and permission for use as an office. Located in the Moneghetti district in the Le Parador building. The area of the apartment is 50 sq. meters, including...

Front line apartment in Monaco Studio apartment 35 sq. M. meters by the sea in the popular building of Monte Carlo Star. The residential complex has an indoor pool, an outdoor pool in the summer, a solarium area. The building...

Apartment in Monaco with pool and sea view