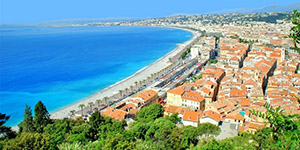 The city of Cagnes-sur-Mer consists of three main areas. Its mountain with Grimaldi Castle is the birthplace of the city. There is an old medieval town that has been well preserved despite numerous wars and invasions over the centuries, just like other coastal cities of the French Riviera. Because of its high position and its famous guests, Cagnes-sur-Mer is called "Montmartre della Costa Azzurra".

Below, Cros de Cagnes was a fishing village that made the city wealthy. In the beginning, fishermen came from Menton and used these swampy waters for their wonderful catch of fish, about twice a year. The abundance of fish in these waters forced them to settle there and found the village of Cros de Cannes. Today, associated with Cagnes-sur-Mer, the village has become a popular seaside resort.

As for the third quarter, this center is called "modern", where there are shops, at the foot of the castle mountain Grimaldi. Here you can enjoy delicious ice cream and get lost in noisy bars.

No property found with the parameters entered