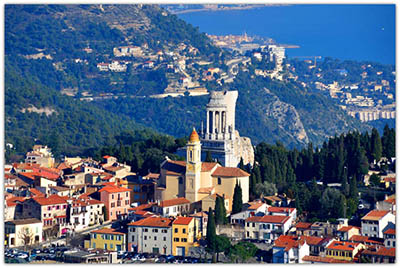 La Turbie is a town that is located above the Principality of Monaco and is located in the mountains with a delightful panoramic view. One of the Roman trophies has been preserved here, to which there is a passage along the mountainous path La Grande Corniche. The photographs clearly show that this is a triumphal building in the form of a tower, erected in honor of the great emperor Augustus.

The name of the tower comes from the Latin - tropea, which means - a trophy. This structure was built in 6 AD. in honor of the victory of Emperor Augustus over 44 Alpine tribes, who at that time were raiding Roman communications. The triumphal tower was built by conquered slaves, and many died there during construction. The tower in its original form was 50 meters high and was visible from a very distant distance, thus showing the power and might of the Roman Empire in those days. In our time, the tower has become shorter by 15 meters, but this has not affected its beauty in any way.

From the beginning of the Alpine Trophy opens the panorama of Monaco which is breathtaking. Dante lived here at one time and his house can be recognized by a memorial plaque. On the board are carved lines from the Divine Comedy, in which the Alpine Trophy is mentioned. In this town on the Cote d'Azur, you will find the true beauty of French Provence.

The old streets with cobblestone pavements and flower decoration of the facades have preserved the true flavor of old France! Real estate in La Turbie is also in great demand. Firstly, it is cheaper than in Monaco, and secondly, Monaco is within easy reach. You will have the opportunity to enjoy a beautiful view of the sea, the coast of the French and Italian Riviera, Cap Ferrat and Cap Martin, Alpine Trophy, the Principality of Monaco. Property in La Turbie on the French Riviera

Modern villa with sea and Monaco views. For sale a cozy villa of 275 square meters. m with breathtaking sea views 5 minutes from Monaco. On the ground floor of this prestigious villa there is an entrance hall, a spacious...